News
This post was originally published on this site

My colleagues on the AWS team are always looking for ways to make it easier and simpler for you to protect your data from unauthorized access. This work is visible in many different ways, and includes the AWS Cloud Security page, the AWS Security Blog, a rich collection of AWS security white papers, an equally rich set of AWS security, identity, and compliance services, and a wide range of security features within individual services. As you might recall from reading this blog, many AWS services support encryption at rest & in transit, logging, IAM roles & policies, and so forth.

Default Encryption
Today I would like to tell you about a new feature that makes the use of encrypted Amazon EBS (Elastic Block Store) volumes even easier. This launch builds on some earlier EBS security launches including:

You can now specify that you want all newly created EBS volumes to be created in encrypted form, with the option to use the default key provided by AWS, or a key that you create. Because keys and EC2 settings are specific to individual AWS regions, you must opt-in on a region-by-region basis.

This new feature will let you reach your protection and compliance goals by making it simpler and easier for you to ensure that newly created volumes are created in encrypted form. It will not affect existing unencrypted volumes.

If you use IAM policies that require the use of encrypted volumes, you can use this feature to avoid launch failures that would occur if unencrypted volumes were inadvertently referenced when an instance is launched. Your security team can enable encryption by default without having to coordinate with your development team, and with no other code or operational changes.

Encrypted EBS volumes deliver the specified instance throughput, volume performance, and latency, at no extra charge. I open the EC2 Console, make sure that I am in the region of interest, and click Settings to get started: 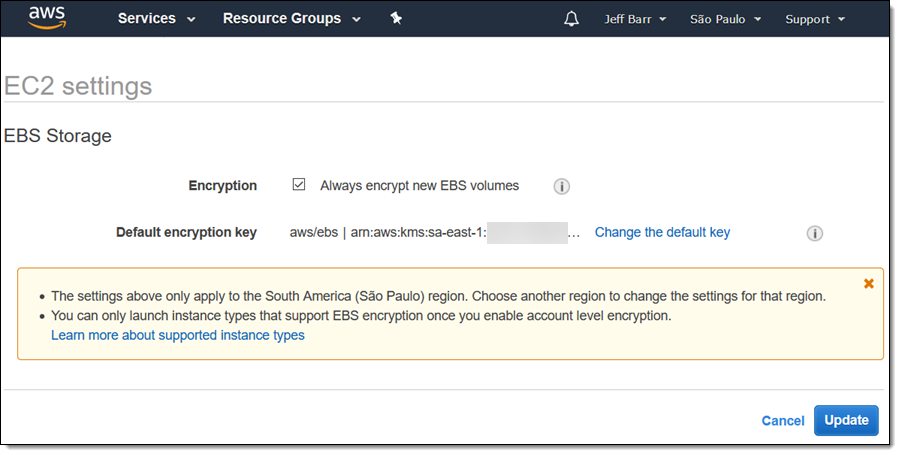 I can click Change the default key and choose one of my keys as the default:

Either way, I click Update to proceed. One thing to note here: This setting applies to a single AWS region; I will need to repeat the steps above for each region of interest, checking the option and choosing the key.

Going forward, all EBS volumes that I create in this region will be encrypted, with no additional effort on my part. When I create a volume, I can use the key that I selected in the EC2 Settings, or I can select a different one: 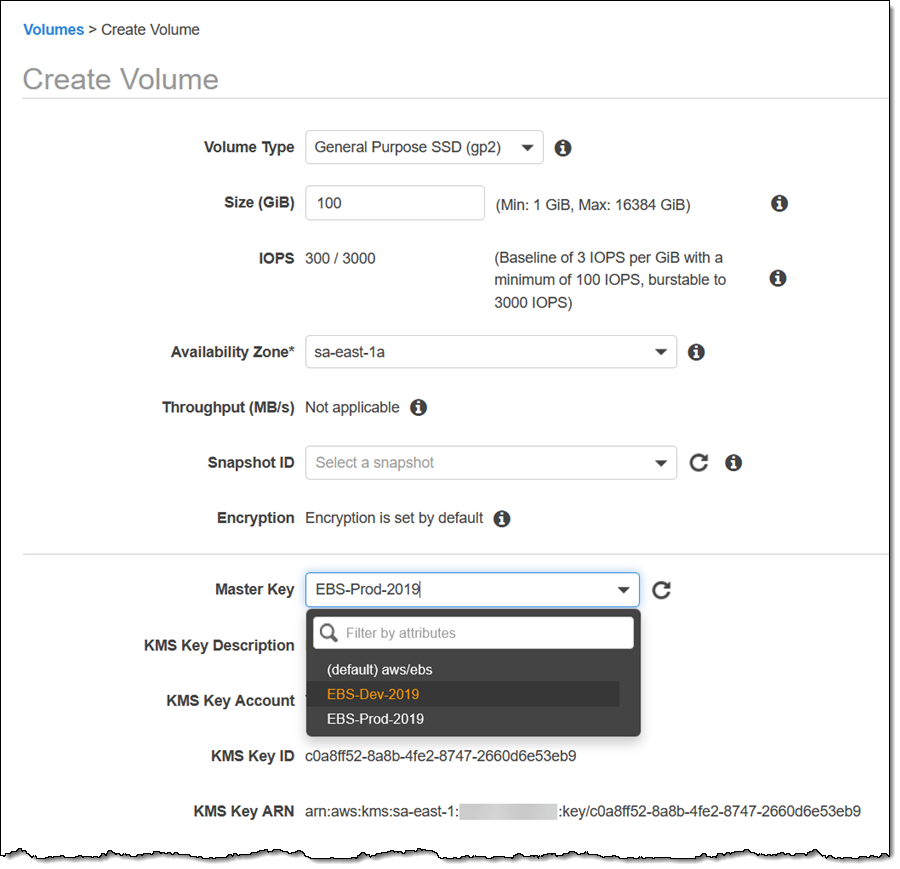 Any snapshots that I create are encrypted with the key that was used to encrypt the volume: 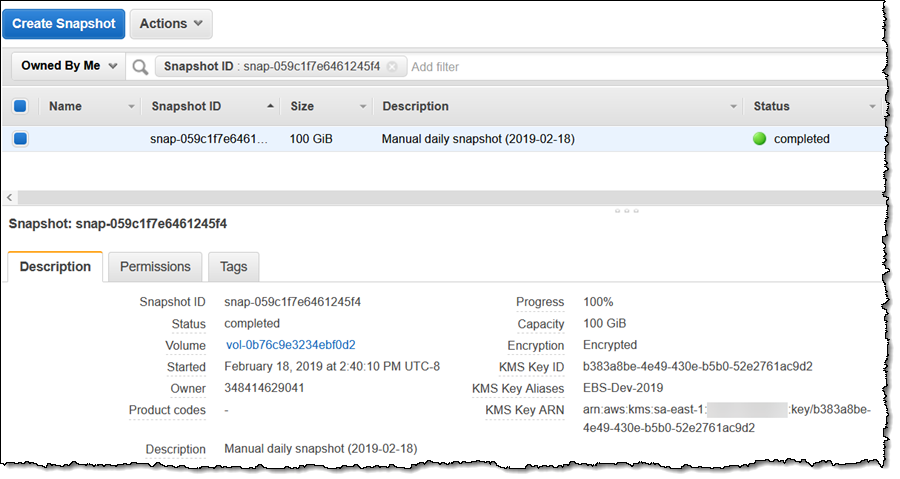 If I use the volume to create a snapshot, I can use the original key or I can choose another one:

Things to Know
Here are some important things that you should know about this important new AWS feature:

Older Instance Types – After you enable this feature, you will not be able to launch any more C1, M1, M2, or T1 instances or attach newly encrypted EBS volumes to existing instances of these types. We recommend that you migrate to newer instance types.

AMI Sharing – As I noted above, we recently gave you the ability to share encrypted AMIs with other AWS accounts. However, you cannot share them publicly, and you should use a separate account to create community AMIs, Marketplace AMIs, and public snapshots. To learn more, read How to Share Encrypted AMIs Across Accounts to Launch Encrypted EC2 Instances.

Other AWS Services – AWS services such as Amazon Relational Database Service (RDS) and Amazon WorkSpaces that use EBS for storage perform their own encryption and key management and are not affected by this launch. Services such as Amazon EMR that create volumes within your account will automatically respect the encryption setting, and will use encrypted volumes if the always-encrypt feature is enabled.

No Charge – There is no charge to enable or use encryption. If you are using encrypted AMIs and create a separate one for each AWS account, you can now share the AMI with other accounts, leading to a reduction in storage utilization and charges.

Per-Region – As noted above, you can opt-in to default encryption on a region-by-region basis.

Available Now
This feature is available now and you can start using it today in all public AWS regions and in GovCloud. It is not available in the AWS regions in China.

This syndicated content is provided by AWS and was originally posted at https://aws.amazon.com/blogs/aws/new-opt-in-to-default-encryption-for-new-ebs-volumes/

Popular
Recent
Comments
Tags
AWS Ground Station – Ready to Ingest & Process Satellite Data Kubernetes Lifecycle Management with Docker Kubernetes Service (DKS)
Scroll to top Do NOT follow this link or you will be banned from the site!