In November, we published a story on how Salesforce uses MuleSoft to improve employee onboarding. Over the coming months, we will be highlighting the various ways Salesforce has transformed by leveraging MuleSoft and an API-led approach. Today, we will cover how Salesforce enabled this operational shift using a MuleSoft strategy called C4E.

The value of APIs and an API-led approach has become widely publicized when it comes to innovative technology strategies. This strategy enables businesses to build reusable assets and speed up innovation by decoupling central IT from the rest of the organization. But, what needs to happen once an organization decides to transition from a traditional approach to integration to API-led? As Salesforce was beginning its transition to API-led with MuleSoft, we had the same question. And implementing a C4E was the answer.

A C4E (Center for Enablement) is a cross-functional group that drives this IT operating model and enables the shift to API-led connectivity. A traditional Center of Excellence features centralized expertise and focus on production rather than enablement, which unintentionally results in information being protected and rationed. Removing the bottleneck caused by a traditional CoE, a C4E enables business divisions — including but not exclusively, IT — to build and drive the consumption of assets (like APIs) successfully and independently, without relying on the delivery capacity and know-how of a traditional CoE. This ultimately enables speed and agility. It encourages and trains business and IT teams to shift from a production-based to a production-and-consumption-based delivery model. Salesforce’s C4E was made up of teams across the organization and enabled the company to transform its operating model and approach to connectivity, creating a culture of discovery and reuse.

The challenge at Salesforce

With continued growth, both organic and through acquisition, Salesforce found itself with numerous siloed systems that were often disconnected. Custom code, point-to-point integrations were brittle and unscalable, leaving its IT teams in a constant reactive versus proactive state, which slowed innovation. While Salesforce knew an API-led approach was important to future-proof the business, individual teams had no governing body to regulate standards and limited operational structure or hierarchy they were required to follow. Teams were often unaware of work being done in other parts of the organization, which led to duplicate efforts, and made it difficult to implement widespread, operational change.

How Salesforce addressed this challenge

Salesforce established a Center for Enablement to develop a culture of reuse in the move toward an API-led connectivity approach. Eight individuals were selected from varying teams, a liaison of people with both the business acumen and technical knowledge to advocate for the adoption of MuleSoft’s approach to connectivity. The group defined a roadmap, curated best practices and developed standards specific to the customer’s needs. They determined key KPIs to track the success of the transformation, and held workshops and trainings to win the hearts and minds of IT teams.

“This group is super helpful to be able to understand what MuleSoft is and what it could mean for our internal teams and external customers.”

As any organization does when in the midst of a wide-spread cultural shift, Salesforce’s C4E team faced a couple of common challenges. First, and most common, was that the desire to immediately convert all integrations to APIs on MuleSoft. While the enthusiasm was promising, the C4E encouraged the broader organization to take a phased approach to this shift, allowing a smoother transition, and more meaningful adoption. The second challenge the team faced, was that many of the integrations at Salesforce were being built by contracted, short-term employees. This was leading to over-use of custom code, as those employees were building for the short term, without a future-forward perspective. The C4E’s solution was converting them to full-time employees and enable them with the API-led perspective, leading to integrations built as APIs with reuse in mind.

The C4E has made a huge impact on the entire organization by enabling an API-led for Salesforce. The time it took to develop new integrations decreased from four months to just two weeks. There has been a significant reduction in manual work because resources are exposed and discoverable, fostering re-use and minimizing duplicative efforts. Due to the enablement and structure that a C4E provides, Salesforce increased the consistency and accuracy of its data among all systems, increasing the accuracy and efficiency of both internal and external processes. Most importantly, as our number of reusable assets in Anypoint Exchange increases, time to complete new integrations and projects has gone down by 85%, and developers are much happier with their day-to-day tasks since they can focus on innovation.

We were able to improve overall performance by introducing reusable assets and creating a framework using API led. 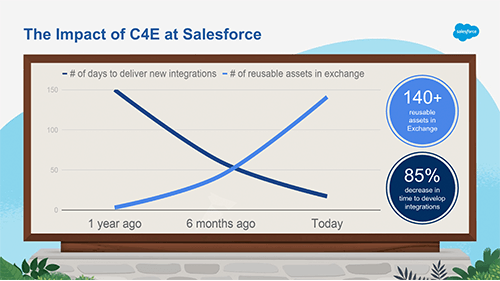 For more information on creating your own center for enablement, download our whitepaper.

Dynatrace kicks off 2020 with ‘Best Places to Work’ award
Scroll to top Do NOT follow this link or you will be banned from the site!